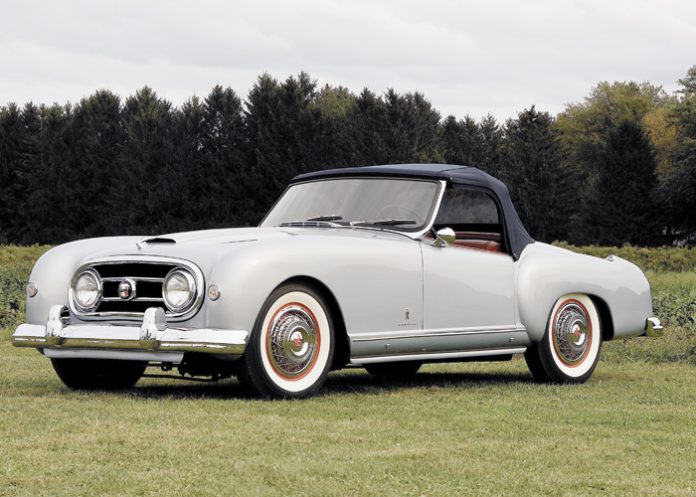 In 1945 Donald Healey formed the Donald Healey Motor company with Ben Bowden and chassis-builder Achille Sampietro in Warwick, England. The sole intent was to produce a high-end performance car.

In 1949, Healey was returning to England on the ocean liner Queen Elizabeth. He was coming back from Detroit, where he met with GM executives to inquire about purchasing the new OHV 331 cid Cadillac engine. Healey wanted to use the OHV 331 in his Silverstone race car. Race car driver Briggs Cunningham had done jus that, and Healey wanted to buy more engines from Cadillac.

Cadillac had politely said “no.” By coincidence, George Mason, president of Nash Motors, was also on the Queen Elizabeth. Donald and George met at dinner, and by the time the ship docked in England an agreement was reached where Nash would supply Healey with the OHV Nash 234.8 cid/3.8 inline-six cylinder engine with a three-speed overdrive manual transmission.

Donald Healey and his team had an aluminum head made for the Nash OHV 234 cid with two side-draft carburetors that worked in conjunction with an oversized intake manifold. The seven main bearing crankshaft was 100 percent counterbalanced.

The first Nash Healey production cars of 1951 and 1952 had an aluminum alloy body designed by Healey and built by Panel Craft in England. The car made its U.S. debut at the 1951 Chicago Auto Show and was to have a list price of $3,767 in New York City.

George Mason did not like the English body style of the Donald Healey and Ben Bowden-designed 1951 and 1952 Nash Healeys, so in 1952 he commissioned the Italian designer Pininfarina to restyle the body. Mason wanted a body style more in line with the restyled Pininfarina-designed 1952 Nash Statesman and Rambler. The result was the 1953 Nash Healey Le Mans coupe and roadster. The roadster had no glass windows in the doors but plastic curtains which snapped into place for inclement weather. A car with glass windows in the door was called a convertible.

The Nash Healey was to be a limited production car (very limited it turned out), according to Nash, until public reaction had been tested. Limited production is car manufacturer’s language for “if sales are not too good we are off the hook for poor sales.” If the car sales do take off, then the manufacturer is only meeting public demand by producing more than a “limited production few cars.”

The 1953 Nash Healey Le Lans was truly an international car, which did not help in the final cost of the car. The body was designed and made by Pininfarina at their plant in Turin, Italy. The mechanics, engine and transmission were from Nash Motors in the U.S., and the chassis with trailing link-arm suspension was made by Donald Healey Co. of England. All this shipping of the car added to the final production cost of the 1953 Nash Healey. In the United States the price was $5,858. Since the mechanics of the car are Nash there would be no service problems. The Le Mans would be sold and serviced by regular Nash dealers in the United States.

The distinctive design provided for excellent front and rear vision. The low hood was at least a car generation ahead of its time in style and design. The headlights were mounted in the simply-designed race car type air scoop grille.

Michael Pomerance always liked “uniquely-designed, limited-production cars that had some performance.” The Nash Healey Le Mans Coupe in dark burgundy fit that bill. Michael thought the coupe was more attractive than the roadster.

“Plastic curtains belong in a shower, not on a car,” Michael told me.

Michael bought the car from the third owner in 1998. The previous owner had the car painted and some engine work done in the ten years he owned it. Michael still owns the car and drives it on warm, dry weather days.

“My father saw the car on the used car lot of a Chevrolet dealer in Allentown, Penn,” Mosteller said. “He had seen some pictures of the car in car magazines in 1953 and liked the look of them but not the price. His brother had a 1955 Nash Statesman and was happy with that car. So he knew a little about the Nash engine. The owner of the Nash traded it on a 1955 Corvette. The car has been in the family since. In 2005 Richard had the car painted, new leather interior and the motor rebuilt and like his father uses it from May to October on dry days.”

As for the ride, the-race inspired suspension is quite adept on country roads and can hold its own with cars of today. On the open highway, with a weight under 3,000 pounds, the OHV 234 cid engine with twin carburetors enables the Le Mans to cruise at 75 mph effortlessly. The car is from a different era, when you could see fore and aft from the drivers seat with no blind spots and with good feel of the road below.

With its high price, competition from the $1,000-lower-priced Jaguar-XK 120, which was a known car, and with Nash’s financial situation, production of the luxurious Nash Healey was halted in 1954 with a total of 506 Nash Healeys built. • 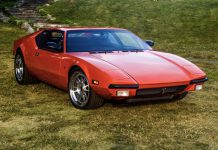 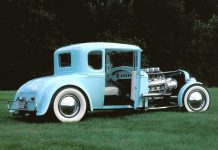 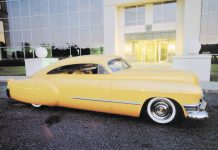