On the south side of Johnson City, Tenn., is Tipton-Haynes, a state historical site. In 1788 two opposing militias fought here to determine the fate of the fledgling State of Franklin. In what turned out to be a beta test for the new U.S. Constitution,* this so-called “Battle of Franklin” happened less than 50 yards from what is now the front door of Woods Automotive. As we’ve said, history is where you find it. Sometimes it’s right across the road.

“When I first moved here in 2002, there was a lady who used to manage Tipton-Haynes,” said owner Randy Woods. “I worked on her vehicles and learned a lot about colonial history. And I keep finding out more and more stuff about it to this day.”

Woods’ own history is an example of vigorous learning on the go. As a youth he enthusiastically engaged in motorsports, tuning his mother’s ’69 Pontiac Grand Prix in shop class.

“It was a huge car,” he recalled. “People would laugh and say, ‘Hey, you got you momma’s car running right?’ We’d race, and they’d get surprised when this big car passed them. I’ve still got the engine that came out of it.”

He began earning a paycheck in 1978, working a variety of jobs in the industry. Then in ’94 Woods made his passion a profession when he got a business license and began building high-performance engines and drivetrains on the side. This led to him becoming friends with NHRA Pro Stock racer Allen Johnson, for whom he crewed during the 1999 and 2000 seasons.

“We were in NHRA’s Top 10 both years, one of the fastest Chrysler Pro Stocks at the time,” Woods said.

This proved to be another learning experience — just not the one he expected, as he observed the financial realities of professional drag racing.

“I had been really hungry to go racing, and I guess the Lord saw fit to show me that it could not happen, at least not at that level,” Woods mused.

After he finished his stint with the NHRA, Woods finally got a stand-alone shop, but he was still clinging to performance work on drag cars and motorcycles as a primary means of support.

“The next thing I know,” he said, “I started getting more repair stuff to do.”

With this new impetus, Woods quickly outgrew the original location and bought the 5,000 sq. ft. facility he now occupied. But much like the constitutional crisis which brought about the Battle of Franklin, he realized he needed to jettison the old plan and come up with a new one.

“My whole goal before was to go fast, and I got to thinking that if I had my own business I could sponsor myself,” said Woods. “But it kind of went in a different direction. When I opened this place here, I knew I’d have to double, maybe even triple my sales to pay the bills for this bigger building. We did it, but I never really got to invest in my racing career like I wanted to. I just had to do what I had to do.”

Like everyone else in the repair industry, he had his share of misfires — at one point getting rid of almost the entire staff and started over. But over the years he has found some outstanding people, and currently has five employees, a receptionist up front, and four technicians in back, including himself.

“I’m pretty pleased with all of them,” he noted. “We can do most anything: timing belts, brakes, clutches, suspension, struts, tie rod ends, ball joints, AC systems, wheels and tires. And this year has worked really well as far as doing engine and transmission replacements. If someone has a problem with an engine that has 150,000 miles but the car’s in pretty good shape, I don’t see any reason not to put a new engine in it.”

“I can’t compete with the three-year/100,000 warranty on them,” he explained. “And I can assure my customers of their quality, because I’ve been to the factory twice in Jasper, Ind., and they build these engines better than when they were new.”

And all it takes is a phone call when it comes to honoring a Jasper warranty.

“I had an RV in here a couple of years ago that was going cross country,” Woods cited. “Jasper gave him a new engine, we put it in and sent him on his merry way. He didn’t pay a dime, and Jasper paid me for everything. I advertise Jasper on everything we have here; I’ve got Jasper on our shirts.”

“Like my scanners and my pass-through that I can program the car’s modular computer,” he added. “Thing about that is you have to enroll with a manufacturer like General Motors to download programs for a Chevy. Because it’s pretty expensive, you’d have to do a lot of that type of vehicle to make it worthwhile.”

“Diesels are kind of an animal of their own,” Woods commented. “It’s a major overhaul to do much of anything to them these days, like injectors and stuff. Most of time I just pull the body off to pull the heads, but not too often.”

And what is the most profitable?

“It depends,” he said. “On average my labor rate is probably $20-plus lower than the other side of town, but I’m not the cheapest either. Like with brake work and tires, you don’t really make a lot on that kind of stuff, because there’s so much competition.”

One thing he doesn’t see much competition on is hybrids.

“I used to hardly see any, now I’m seeing more and more,” Woods observed. “Of course, I tell my guys that they have to be aware of the high amperage orange cables, to stay away from them. We usually have a class by one of the parts stores that I can send the techs to once a year. They also have AC classes, and I may send some of the guys to that if they want to go.

“But most of the time I do all the in-house training myself, as we go,” Woods explained. “If we pull something new in, we’ll discuss what and how I want to do this certain job. Of course, I tell them that my way is how we’re going to do it now, but it may not be the right way; if they have a better way, we’ll discuss it and if I agree, we’ll do it their way. There’s nothing set in stone here.”

Future tech, like self-driving cars, doesn’t worry him much.

“As far as repairing the computers, we’re probably not going to be able to touch any of that stuff. We’ll just have to determine if the problem actually is the control module, which we’ll replace, or a problem with the steering mechanism; because a lot of what we’re seeing now are problems with electric steering. In later years it’s going to be that type of repair.”

Woods himself still does some race stuff when he gets the time.

“I still build a lot of differentials,” he said. “There are a lot of hot rod guys and show car guys that have a nine-inch Ford or a 12-bolt Chevy that they need rebuilt. Drag cars usually have nine-inch Ford housings that need to be reinforced. I also used to do a lot of dirt track cars at my old location.

“I don’t think retirement’s going to be in the picture. I can see myself here for another 10 years or so — or until I move up in the mountains somewhere, start a tree farm and raise Labradors on the side,” laughed Woods. “I think everybody here would say the same thing, because they’re on the same path I’m on. It’s a never-ending battle trying to keep up the building and everything’s that here, and maybe if I can get my race car back together, go racing.”

Like the pioneers who dreamed of creating a new state in the wilderness, Randy Woods thought big, working toward one goal. He carefully squired his resources of time, talent and tenacity — only to discover a completely different goal in the process. For while the State of Franklin failed that day in 1788, eight years later the State of Tennessee succeeded.  • 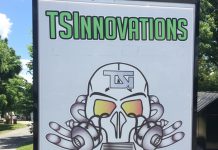 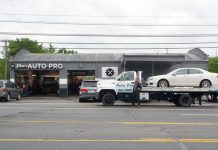