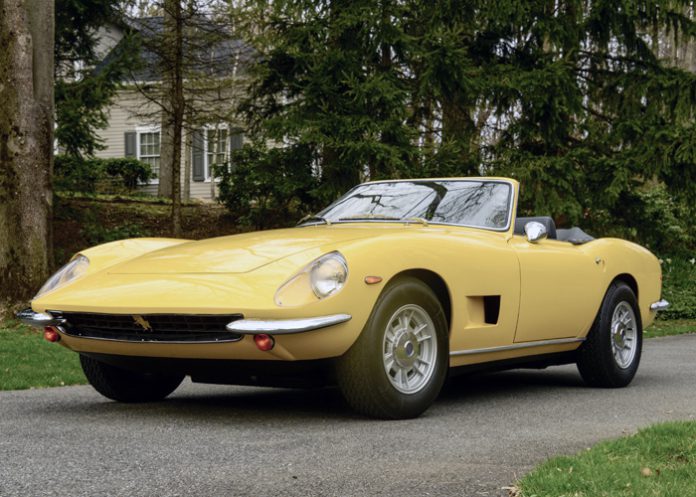 The 1972 Italia Spyder built by Intermeccanica is not a “kit car.” A kit car is basically a car that a company sells in various stages of “undress” — chassis, body, mechanical components, etc. — and the person who buys the kit can assemble it or the company that sells the kit will assemble it for you with an engine of your choice.

Intermeccanica was founded in Turin, Italy, in 1959. It began as an aftermarket speed equipment company making speed equipment kits, such as carburetors and big-bore exhaust systems, for Fiat, Peugeot, Simca and other smallbore European cars that were underpowered. Frank and Paula Reisner, who started the company, had a particular fondness for anything Italian.

Intermecannica’s first attempt at producing a car was the Apollo, made from 1962 to 1965. The bodies were aluminum and made in Italy. They were shipped to International Motor Works in Oakland, Calif., where a choice of Buick engines were offered: the 215 cid V-8 or 300 cid V-8. The Apollo weighed 2,300 lbs and 42 Apollo’s were made.

Frank Reisner decided after the Apollo project that the only way to be successful was for Intermeccanica to make their own bodies. In 1967, Frank and Paula Reisner formed Intermeccanica in Turin, Italy, and began manufacturing the Italia Spyder. The first Italias built were called a Torino. Ford had the Torino name registered and so the name change to Italia.

Production began after a long series of events, including name, ownership and engineering changes. This explains why the Italian-American hybrid isn’t more well known but does little to hide the car’s Italian flair and V-8 performance.

The Italia’s chassis was designed by ex-BRM designer John Crosthwaite. The sleek steel body design was by Robert Cumberford with some tweaking by Frank Scaglione from the legendary car design house Bertone,

The Italia has the popular sports car body design of this era, characterized by the long nose and short deck which are elements of the 1969 – 1972 Ferrari Daytona and the first generation 1968 – 1972 Corvette Stingray with the front bumper that was still chrome. The Italia’s body was completely handmade, which was then placed onto the light tubular frame.

This is where the misconception that the Italia is “kit car” comes from. The Italia is not a car that was built in the 1980s or 1990s to look like a car from the early 1970s. It was built from 1967 to 1972, the same time period of the Ferrari Daytona and the first-generation Corvette Stingray. The gauges in the Italia are Jaeger, which are the same type used in the Jaguar XKE.

As for the engine, a deal was made with Ford Motor Company to supply the 351 Cleveland V-8. The engines were shipped to Turin, where the Italia was built. The Italia was a well-engineered, hand-crafted production car. It is not to be confused with a kit car.

The 1972 Italia seen here represents the final year that the Italia was made. To handle the torque of the 351 C engine a floor-mounted four-speed Top-Loader transmission was used.

The Italia was one of the best of the Italian-American hybrids — Italian design and American V-8 engine power.

Warren Seifer, the owner of this yellow Italia, did not know that much about the Intermeccanica Italia when he bought it, except for the fact he loved the design of the car and that it had an American engine. Warren had the car about three years when he finally knew all about the Italia and that his was not original in some respects. From researching with Intermeccanica Warren discovered the mustard yellow of his Italia was wrong and the vinyl-covered seats, which Warren knew were incorrect, were not even done in the original design.

Warren had the body stripped to bare metal which revealed a very sold body with just a spot of rust on the lower rear quarter of the passenger side. The interior was taken out and the correct leather and pattern design with new black carpet was installed. This was with the help of Intermeccanica supplying the correct information when the car was new

The word “spyder” comes from a horse drawn carriage that was “sporty” and had top that could be lowered and usually sat only two people They were also called “sport phaeton.” Ferrari and some other European car companies liked to call their cars two-seat convertibles “spyder” or “spider.” 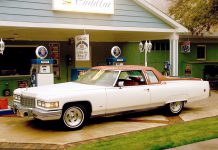 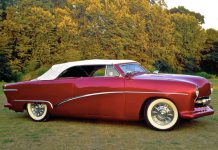 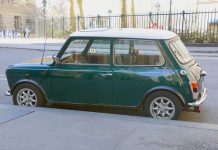