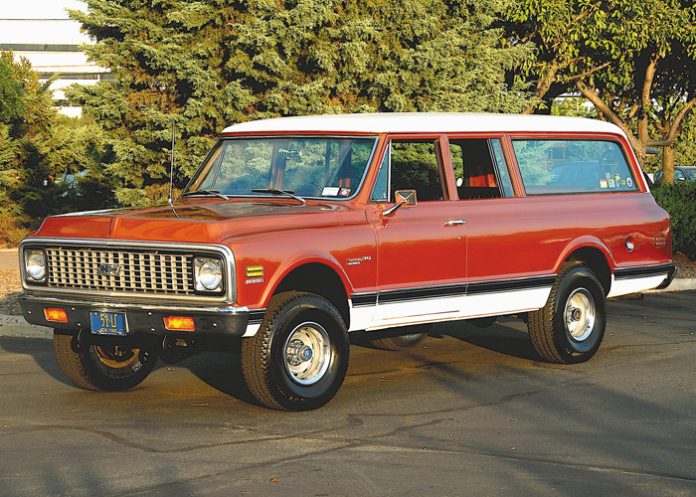 The first Chevrolet Suburban was made in 1935, and it had an all-steel body. It did not have a wood frame or wood anywhere, unlike the depot or station wagons of the time period, which still had wooden body’s. Originally, Chevrolet called the vehicles “Carryall Suburban.” In the GMC version, first made in 1937, it was named “Suburban.”

The word “suburban” was also used by DeSoto, Dodge, Plymouth, Studebaker and Nash to indicate that a station wagon-type vehicle was built on a commercial chassis. In 1978 Plymouth ceased making their Suburban. It was the last car company besides General Motors that was still making a Suburban. In 1988 GM was awarded an exclusive trademark on the name.

The 1972 Suburban seen here is the sixth generation Chevrolet Suburban. It featured a single door on the driver’s side with two doors on the passenger side. It “is said” this was done as many Suburbans were used for small school buses, and this door configuration prevented children from exiting on the driver’s, or road side ,of the Suburban. It was “also said” the lack of a rear door on the driver’s side was for families with children, and this would prevent a child from exiting onto the road side of the Suburban when it came to a stop. There has never been anything officially written on this from Chevrolet.

Many Suburbans were, however, used by ambulance companies, fire departments and as emergency police vehicles, and the elimination of the rear door on the driver’s side was to their benefit, as this side could have a stretcher, or a “wall,” to hang equipment. Since a majority of Suburbans were used this way, it was less costly to make a three-door body Suburban than to have a three-door and a four-door body.

In 1973 the seventh generation of the Chevrolet and GMC Suburban again had rear exit doors on both the passenger and driver side, as use by the general public was increasing. The Suburban was not just for emergency vehicles any more.

This Suburban was ordered by a company that had school buses in Macungie, Pa. It had the third seat and was used on roads where the larger school buses at the time could not go. The lack of a rear door on the driver’s side was a plus since no child could exit on the road side. The Suburban never had roof top lights but did have auxiliary red lights in the rear and also in the front.

In the late 1980s, as vans became more passenger friendly, the Suburban was sold to a local farmer who raised corn and pumpkins. He liked the fact it was a commercial chassis. He could throw corn into it to bring to the weekly farmers market and not have to worry if it rained and ruin the corn on the way to the market.

In the winter he had a front plow on it and would not only plow the road to his house and barn but also earn money plowing drive-ways and small shopping centers.

In the early 2000s the farmer decided it was time to slow down and retired. His daughter and son-in-law took over the operation of the farm.

There is an annual car event at Macugie the first weekend of August, and the farmer brought his 1972 Chevrolet Suburban. This is a non-judged car show. It is for vehicles 25 years or older with many dating from the early 1900s. The Suburban by now did not have its auxiliary red lights and no markings that it was a school bus. It was also resprayed by the farmer when he bought it to the coppery color it is now. It was resprayed in front of his barn — “not exactly a professional job,” he was quick to say.

Alex Soultanis was visiting the car show in August 2003 when he saw the Suburban. Alex is a member of the AACA and is a judge at the annual AACA car show at Hershey, Pa., every October. Alex always had a soft spot in his heart for the three-door Suburban, because they were unique. Alex also wanted a Suburban since he could haul heavy objects for the various projects he was always working on (the Suburban can carry 3,100 pounds) and also go camping off road with a four-wheel drive vehicle. With a rear opening of 57 inches wide and 41 inches high, there wasn’t much Alex could not load into the Suburban,

Alex asked the farmer about the Suburban, and aside from some minor rust on the front fenders and rust on the lower rear quarters, the Suburban was in good condition. The engine and four-wheel drive were very good, as was the interior.

One of the features of this Suburban that whetted Alex’s interests was the dial air conditioning. There was the standard front unit which was both cooling and heating, and there was a rear unit which was for cooling only and was mounted on the inside from the ceiling. This is because the Suburban was originally used as a school bus. Each unit had their controls mounted on the instrument panel. Even in its “this is a working vehicle form” at Macungie the two-unit A/C was quite a conversation piece. Alex asked the farmer if he would sell the Suburban, and he said, “maybe — no one has ever asked me.” To which Alex said, “Well, I am now.”

The farmer told Alex he had the second and third seats at home in his barn, and that he was welcome to come by and see them. As he lived 15 miles from Macungie, Alex took him up on this. By now Alex knew he wanted this vehicle if the price was reasonable. A deal was set that Saturday when Alex saw the seats. The farmer was very happy that the Suburban had a new home

When Alex got the Chevrolet back to his father’s home in New Jersey, he began work on the Suburban the following weekend. Off came the front fenders and the rear quarters were cut above the rust at the end of the wheel well to the rear bumper. The advertised “inner fenders” did in fact do their job of preventing rust. Over the next seven months every weekend Alex worked on the Suburban. Alex is a graphic artist, but from his father, who always had a collector car, he learned how to weld, take down an engine, and even sew material to make new seat covers.

When it came time to repaint the Suburban, Alex liked the brownish-copper color but not the exact shade, the lack of a good respray aside. Alex had seen sales pictures of 1972 Suburbans, and several had the vehicle in two-tone form as a family vehicle. Alex decided on factory PPG truck color Copper Poly 522 2202 with a white roof and lower quarters white also. Alex found NOS front and rear fenders in Hemmings Motor News, and all the body trim was still available at a local Chevrolet dealer.

The original L 78 x 15 tires were replaced in the late 1970s with 235/75 x 15 radial tires, which Alex replaced with 255/75 x 15 radial truck tires that provide good ground clearance for the few times Alex goes off road. With a wheelbase of 133 inches and length of 215 inches, the ride on the highway is more cruiser-like than truck-like, and with a weight of 4,825 pounds you have the feeling of substantial vehicle. • 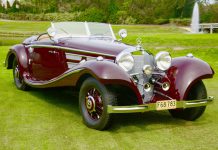 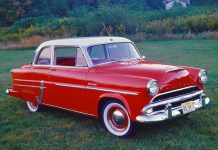 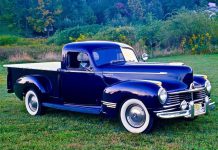