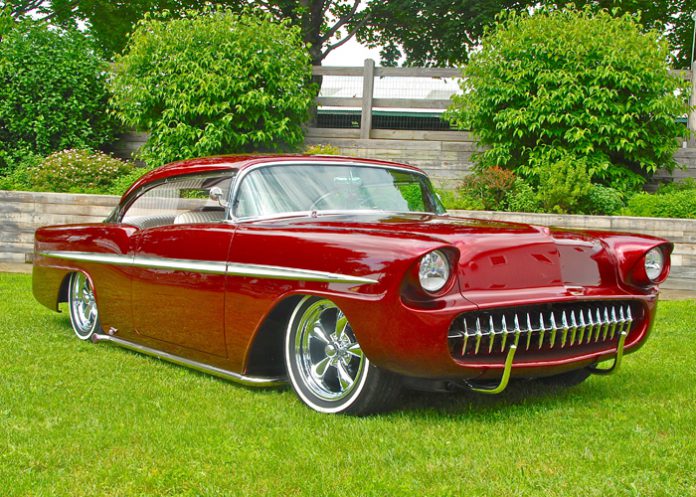 This 1956 Chevrolet 210 two-door hardtop has been owned by Harvey Bagshaw since 1960. The 210 Chevrolet was the “middle” model for the Chevrolet line of cars in 1956. There was the entry-level 150 series, the 210 being the middle tier, and the Bel Air, which was at the top the “luxurious model” and included the convertible.

This car has been through several re-incarnations since Harvey first bought it., the last being in the late 1980s. When Harvey first got the car he lowered it, had it nosed and decked, shaved the door handles and had loud pipes installed. This was at the time the popular thing to do to custom cars in the 1950s and 1960s. In the 1960s the car was used as a dragster. In the 1970s on weekends Harvey even used the Chevy as a family car with his four children, minus the loud pipes.

In the 1980s the Chevy began its last transformation. From 1960 to this point the car had seen four engines, six transmissions, four rear ends, five paint jobs, and two interiors. This was the final stage in the Chevy’s life. Harvey decided to change the car’s focus one more time, and the result is what you see here.

Harvey owns his own collision shop, and behind it he has his own personal garage where he does work on his own cars, including the Chevy 210. After the collision shop was closed for the day Harvey would spend many an evening and weekends working on his cars in his garage.

Harvey decided to go full custom this time. He wanted the car to be symmetrical from front to back, which he no doubt achieved. The front and rear pans were molded and protected by nerf bars. The grille is 1958 Corvette.

The profile of the headlight openings matches the profile of the openings for the custom-built Lee taillights. The headlights are Frenched and were tunneled by using ’54 Mercury extensions. The rear wheel-well openings now match the front wheel-well lines, and the rear quarter panel also matches the front fender panel. The trim is from a ’58 Chevy. The headlights are the newer type made for hot rods and customs with bulbs for the headlight, parking light and directional signals all contained in the headlight, to give the car a clean look up front and also to have all the safety features in one unit.

A true custom in Harvey’s eye needs a chopped top, so Harvey chopped two and half inches from the top and molded a scoop at the rear of the top. The color choice is a House of Kolor Candy Burgundy, which is similar to the 1956 Chevy burgundy seen on the 1956 Bel-Air four-door hardtop in the 1956 sales brochure, but the Kandy Burgundy is brighter!

The OHV V-8 327cid engine came from a ’62 Corvette and has a roller rocker valve train, a Z/28 cam, and Edelbrock manifold with three Rochester Deuces. A 1956 Chevy three-speed, column-mounted transmission puts the power to the rear wheels. The Chevy rides on Astro Supreme wheels mounted on 205R75x15 tires in front and 215R75x15 in back. The rear end is from a ’64 Chevy and has 4:11 gears. The side trim and the steering wheel is 1958 Chevy. Stopping the car is updated with disc brakes up front and drum brakes in the rear.

The upholstery is done in white pearl Naugahyde pleats with accents to match the exterior paint. Chevy bucket seats are used in front, and the rear seating is from a ’60s Thunderbird.

When Harvey began the project in the late 1980s, air-ride packages that are common today were not available, so it is raised and lowered by hydraulics. The rear of the frame was Zeed to get the car lower to the ground.

Harvey has owned other cars but the 1956 Custom Chevrolet is his favorite, which he still drives to this day — drives is the word. The Chevy is no trailer queen or garage king.

“I did not do all this work to have a car in a trailer behind me when going to a show or anywhere,” Harvey said. “The car was always meant to be a driver, that is where the fun is!”

“See the U.S.A. in your Chevrolet” was a song first used by Chevrolet in 1949. It became popular in American culture when Chevrolet sponsored the Dinah Shore television show in the 1950s, with Dinah Shore singing the tune — it became hers and Chevrolet’s trademark. • 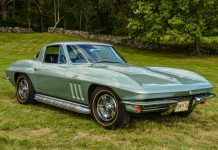 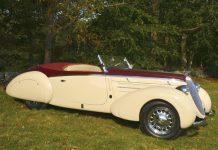 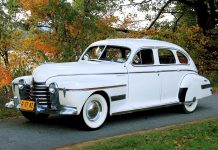