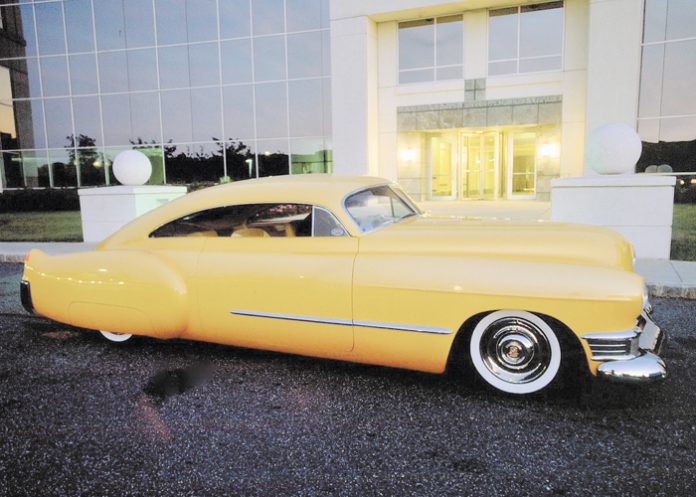 The 1949 Cadillac model line was comprised of the Series 61, which was a four- door sedan and two-door club coupe. The Series 62 had the convertible, a four-door sedan, a two-door club coupe and the brand new Coupe de Ville, also called a “hardtop” convertible. The Coupe de Ville eliminated the side post, or pillar, between the front seat and rear seat and also the metal door frame around the front door. When all four windows were down the car gave the appearance of a convertible when the top was up. The Series 60 was the luxurious four-door 60 Special.

The 1949 Cadillac was the second year of the new post-WW II body design introduced in 1948. The car had small tailfins, the first on any car, which 11 years later culminated in the 1959 Cadillacs lighted rocket-ship-like fins. One of the many design features of the 1949 Cadillac was the hidden gas cap. It was under the rear taillight on the drivers side. Cadillac began this trick in 1941. The taillight flipped up, and underneath it was the gas cap. There would be no gas door on a rear fender to mar the lines of the car. It would remain a Cadillac feature through model year 1958.

Over the years the fastback style of the Club Coupe made from 1941 to 1949, and also called a Sedanette, started to become more popular with many car people for its smooth graceful design, even though it had the side post and the front door was encased in a metal frame. The Coupe de Ville was more boxy, or upright, in part due to the fact that men wore hats with a brim all around and were three or four inches in height. The 1949 sales brochure, which shows all the 1949 Cadillacs in color, are illustrations, not photos. Much artistic license was taken as the cars appear lower and longer than they really were.

Fast track to the early 1990s. Rick Dore of RD Customs was and is an independent designer and builder of cars. Rick always thought that the Club Coupe/Sedanette/fastback body was the car Cadillac should have been made into the Coupe de Ville. The Club Coupe was sleeker than the body used for the Coupe de Ville, and, as time has proven, the fastback was more of a car for the future, as many cars of the 1980s through today have the fastback influence in their design. The radically designed ZZ Top Cadzilla is a 1948 Cadillac Sedanette. Rick’s 1949 Fastback is “what maybe could have been made by Cadillac in 1949,” and it retains much of its original body design in its front and rear bumpers and rear taillights. The Club Coupe that Rick Dore bought in the early 1990s to fulfill his dream of what Cadillac should have done was stored in a dry barn since 1958. It was a rust free car.

Rick sketched how he wanted the car to look — this was the early 1990s and computers did not have a hold on the public as they do today. Rick still sketches his designs by hand and does not use a computer. Rick turned to Bill Reasoner to do all the body work and the interior.

The roof was chopped four inches in the front and five inches in the rear. Some of the rear quarter side chrome trim was removed and the holes filled with lead. The headlights and taillights were frenched for a smooth look. Lowering spindles were used up front to lower the car with a set of Unkl Als low-glide springs. This was the 1990s, unlike today when there are after market air ride suspensions which are completely reliable and take up very little trunk space.

Rick liked the look of the two-piece front windshield and the three-sectioned rear window. They are part of the car’s distinctive character, which Rick wanted to retain. Rick wanted a car that an illustrator in 1949 could have designed and had built, even if it was not chopped as much as Rick did 40-plus years later. Some of the “classics” from the 1930s actually have their roofs chopped four inches or more compared to other cars from that time period. What Rick envisioned and did is not unlike what custom coach builders did in the 1930s.

After all the body work was done Rick chose a House of Color named Tequila Sunrise, which is not that far off from a color Buick used for an ad for their 1953 limited edition Skylark. As for power, a modified Cadillac OHV V-8 472 cid/7.7-liter engine built by Desert Cylinders in Phoenix, Ariz., was coupled to a Turbo 400 transmission, and for stopping power there are disc brakes up front and drum brakes in the rear.

The interior is tan cloth and leather and the car rides on 235/75 x 15 whitewall radial tires. In 1996 the car made its debut at the Grand National Roadster Show in Oakland, Calif., and took Best of Show. In 2003 the Grand National moved to Pomona, Calif.  • 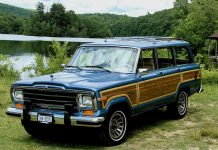 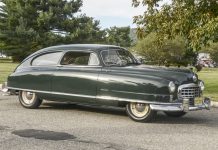 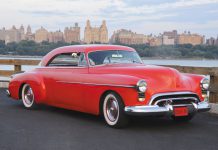