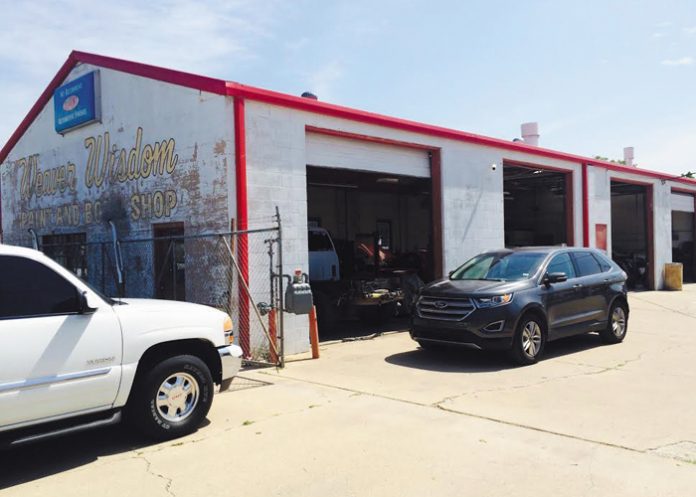 To say Weaver Wisdom Collision Center is an autobody-repair institution in the city of Denton is like saying Texas summers are hot. It’s common knowledge in these parts.

Founded in 1958 and situated at its current location since 1962, the shop has served generations of customers in and around this North Texas town, which is about 30 miles north of the DFW Metroplex and home to the University of North Texas.

On a steamy morning in mid-July, General Manager C.J. Lauderdale was performing a juggling act of sorts: answering the phone, checking in parts, advising techs, updating job progress, keeping an eye on his young son, and fielding questions from a trade writer. The multi-tasking Lauderdale, to use an old sports catchphrase, is obviously the “straw that stirs the drink” at Weaver Wisdom.

Lauderdale got into the business early in his work life after being laid off by Centex Mortgage. He’d already been helping out his repair-savvy neighbor on shade-tree body work, so the neighbor seized the opportunity to bring  him into his shop as a full-timer. Lauderdale went on to work at a variety of collision centers, including Service King and Sterling, but he was more than happy to land at an established independent shop when owner Joe Lattrull brought him aboard his newly-acquired Denton center in 2015.

The collision center, which employs nine, has an enviable and rare five-star rating on Google, and not just from a handful of choice reviews.

“Not only does my car look great, but they did the work at a fantastic price (we paid out of pocket and had been shopping around),” said a reviewer in May. “C.J. and his team took care of us, and I will definitely be coming back – highly recommended!”

Wrote another, “C.J. went above and beyond dealing with insurance. We were confident they’d do a great job on our repairs, as they had done the original custom paint job and they exceeded our expectations.”

One woman wrote than she  had a tire blowout near the shop and workers came out to change it free of charge. Lauderdale responds to every review with a personal thank-you note. Weaver Wisdom has a five-star rating on Yelp and a four-point-nine-star rating on Facebook.

How does the shop earn such high accolades?

“It’s all about our body of work here, relationships, and straight-up customer service,” Lauderdale said. “We take care of the customer and don’t worry about the insurer; and if there is ever a mess-up, we take care of it immediately.”

The center, at 519 S. Elm on the outskirts of Denton’s old downtown, does a healthy mix of insurance, custom, and fleet work, the latter including cars and trucks from the city of Denton, Texas Farm Bureau, Innovation Auto, and CEI, which is a large provider of fleet-accident management and fleet-safety services. It is also a direct-repair (DRP) shop for several insurers.

A hail storm in nearby Sanger, Texas, which Lauderdale describes as “catastrophic,” netted the shop more than 30 additional repair jobs in June and July.

Owner Lattrull, 57, a “retired” Chevy dealer who, ironically, worked in this same space in his late teens with founder Weaver Wisdom, said he is too young to seriously retire and marvels at the irony of once again working where he cut his teeth in the trade. Lattrull said he “lucked out” when he heard the shop was for sale, and quickly snapped it up.

Lattrull had sold cars for 36 years but was always been fascinated with the service-and-repair end of the business. He also had a healthy respect for independent shops and knew that Weaver Wisdom was an ideal fit for his “customer first” business ethic.

“The big production shops like Caliber run you in and out and it may look like your car was properly repaired until you drive it awhile and discover it wasn’t,” he said.

The owner is far from a figurehead; he comes in every day and performs a variety of tasks. But Luttrell gives most of the credit for the shop’s ongoing success to Lauderdale.

“C.J. is the face, the front guy,” he said. “He does a great job taking care of people; he one of the best in the business.”

Though the well-established Weaver Wisdom has earned a wealth of repeat business over its 61 years and is somewhat insulated from the fallout so many independents are feeling, “the industry is going the corporate way,” lamented Lauderdale. “The big corporate shops are buying a lot of the small [independent] shops.”

While other shops are battling escalating paint prices, Weaver Wisdom mitigates that via an arrangement with O’Reilly Auto Parts, which delivers volume-priced quality DuPont paints on demand from a local O’Reilly store that offers a large stock of automotive paints.

“They are killing the PPG [paints] market,” said Lauderdale, whose shop offers a same-owner lifetime warranty on all its paint work.

Lauderdale said he maintains a good relationship with insurance adjusters. Though he often finds himself “fighting“ them on behalf of the customers, there are no hard feelings.

One of Luttrell’s favorite parts of owning a body shop is seeing the look of pride in a father’s face when he brings one of his kids to the shop for the first time to pick up a vehicle or trailer.

“It great when someone brings in a car in a state of disrepair, and it comes out looking like it was on the day that it was purchased.”

Lattrull enjoys assisting being a part of custom work his shop produces and has a few of his own custom jobs he’s particularly proud of, including his “Midnight Special Outlaw Fuel Car,” a race car using nitromethane fuel.

Shop equipment includes a new GFS cross-draft paint booth, a Genesis frame machine and aluminum welding equipment, among other tools of the trade.

As for the future, the shop sits on two acres, a portion of which will be used to expand the complex by 7,000 or 8,000 square feet in the near future and add even more equipment. The entire place will get a facelift, Luttrell said.

Shop founder Weaver passed away in 2006. The shop has since carried on his legacy and relationship orientation, Luttrell said.

“Just about everybody who comes in here knows each of us by name,” the owner said. “We are like the ‘Cheers’ of body shops.”  •