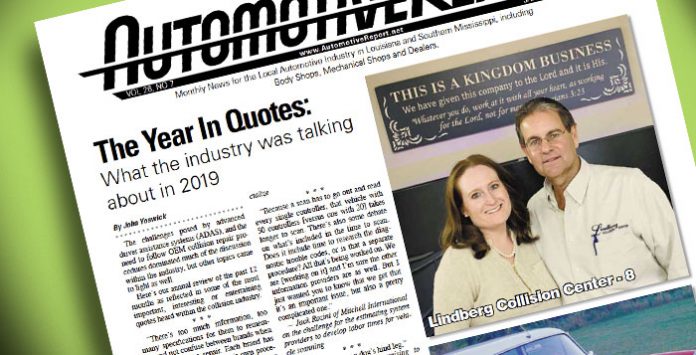 What the industry was talking about in 2019

driver assistance systems (ADAS), and the need to follow OEM collision repair procedures dominated much of the discussion within the industry, but other topics came to light as well.

Here’s our annual review of the past 12 months as reflected in some of the most important, interesting or entertaining quotes heard within the collision industry.

“There’s too much information, too many specifications for them to remember and not confuse between brands when they’re making a repair. Each brand has their own methodology, their own procedures and ways they want specific things done. For a technician to say: ‘I’m going to fix this [brand of vehicle] today and that one tomorrow…but wait, what rivet was I supposed to use? What size? And where is that 4.2 mil drill bit I need to have?’ It’s going to be too much. The technicians are going to have to specialize.”

— Shawn Hart of Audi of America, on the increasing need for technicians to specialize

“Because a scan has to go out and read every single controller, that vehicle with 50 controllers [versus one with 20] takes longer to scan. There’s also some debate on what’s included in the time to scan. Does it include time to research the diagnostic trouble codes, or is that a separate procedure? All that’s being worked on. We are [working on it] and I’m sure the other information providers are as well. But I just wanted you to know that we get that it’s an important issue, but also a pretty complicated one.”

— Jim Beck in 2018, promising to reduce insurers’ influence over Georgia’s Office of Insurance as he campaigned to lead that regulatory agency; after winning election, Beck this year was indicted for his alleged role in an elaborate scheme to steal $2 million from his former employer, the Georgia Underwriters Association

— Ohio attorney Erica Eversman, a consumer liaison to the National Association of Insurance Commissioners (NAIC), responding to insurance regulators’ questions about whether requiring insurers to pay for collision repairs based on OEM repair procedures would raise costs

“It becomes easier to argue against when it gets muddied with other issues. Parts, as an example, have been debated and addressed in almost every state. When that enters into the discussion, it makes it much harder to move something forward. The trend I think this year is that states didn’t isolate the [OEM procedure] issue. I think going forward it would be advantageous to do so. Address some of those other issues at a different time.”

– Aaron Schulenburg of the Society of Collision Repair Specialists, noting that too many proposed state laws related to use of OEM procedures failed because they attempted to address other issues as well

“Oregon courts do not require that a patient identify a broken bone before the patient can receive an x-ray.”

“From I-CAR on down, everyone says you have to follow the OEM repair procedures, and I completely agree. There is no substitute for following the vehicle manufacturer procedures. The challenge for us right now is getting our hands on them, and being able to navigate them. On average, it takes someone two hours to research [procedures] before they can ever start [repairs] on these modern complex vehicles.”

“You would not pay for a scan when a warning light comes on and says, ‘Catastrophic failure ahead unless you get this checked out’? You would just say, ‘Come back and see us after you’ve had this fatal accident and then we’ll see whether we need to repair this’? That’s crazy.”

— A federal appeals court judge trying to pin down an attorney for Geico on when the company does and doesn’t pay for vehicle scanning, during review of a lower court’s dismissal of a potential class action lawsuit over the insurer’s refusal to pay for a scan

“Ultimately, we are choosing to focus on programs and services that are more directly aligned with our long-term, strategic vision for the organization.”

— From a written statement when NSF International in June announced it was discontinuing its certification programs for non-OEM parts, parts distributors, auto recyclers and collision repair shops

“I had a lot of faith in aftermarket scan tools until recently when I wasn’t paying enough attention to what my techs were doing and we let a car go with two rear seat belt tensioners blown, with no warning light on the dash. When I went back to the [aftermarket tool] scan, it said the car wasn’t equipped with rear seat belt tensioners. But when I scanned the car with the Honda tool, it immediately came up with both rear seat belt retractors blown…Aftermarket scan tools can be accurate, and they’re certainly a lot quicker and cheaper. But the complete accuracy to protect your liability may not be there.”

“I don’t have the room, even though I have a large shop, to put up all the targets and do all that. Fortunately, I have a Honda, Toyota, Nissan and Audi dealer within a mile or two of me. So they love us bringing those cars. It’s helping us build a great rapport with them. They’re sending us work like crazy. Three years ago we got rid of most of our DRPs, and with the OEM certifications [and dealer relationships], we’re doing just fine.”

— Dave Carney, owner of Tualatin Auto Body in Tualatin, Ore., on one of the advantages of subletting vehicle system calibration work to dealerships

“Let’s face it, that first notice of loss, when telematics become full-blown and the certified shop gets notice before the [insurance] carrier does, is going to change the game dramatically. If you sold the car and you get that first notice of loss before the carrier gets a chance to direct or steer it, you think that’s not going to change things? I think the next few years are going to be transformational, and I think it’s going to be pretty exciting.”

“When technicians go on a test drive with a scan tool, they are at risk. That is ‘distracted driving.’ So I really encourage shop owners to protect your technicians. Realistically [such test drives] may require two people.”

“If PartsTrader was so awesome, it should be allowed to stand on its own, without anyone being forced to use it. Travelocity, eBay and other sites like them are awesome; we as consumers choose to use them because they add value for the user. PartsTrader doesn’t add value to the shop. It adds considerable administrative time to the parts procurement process.”

“I ask them, ‘What’s the criteria? When do you pay for it and when do you not?’ Often, they struggle to answer that. For us to come up with standards on our own, by our own assumptions, frankly just doesn’t make sense. When it comes to electronics, the only way to look at a system is through a scan tool. So under what circumstances do I look at it and when do I not? They struggle to answer that. So for our company, we have the philosophy that whether we get paid for it or not, we do a pre- and post-repair scan on every car. If nothing else, I can sleep at night by doing that.”

— Darrell Amberson of the Minnesota-based LaMettry’s Collision chain, on trying to address when an insurer says that decisions about whether they pay for vehicle scanning are made on a “case-by-case basis”

“You have to photograph the car in the bay, set up with the targets. Sometimes you can photograph the scan tool during the different steps. But if you properly document what the OEM tells you to do and you did, you will get paid. I have yet to be turned down. Sometimes it takes a couple steps up the ladder, but if you have the proper documentation, right from Audi, right from Honda, it’s really hard for them to deny it. And when you ask them to deny it in writing, you get the go-ahead pretty quickly.”

“This wasn’t just a series of unfortunate events. This was something intentionally chosen to have been done to the vehicle that impacted everything that happened to us.”

— Marcia Seebachan, speaking at the Collision Industry Conference (CIC) of a shop’s decision to use adhesive rather than welding (as called for by the automaker) to repair a car in which Seebachan and her husband were severely injured in a subsequent accident, leading to their successful lawsuit against the shop

“This is really about human impact as a result of bad decisions. Every one of us in this industry is in a position to make decisions. Those decisions impact people and their vehicles and their families and their safety. So I think it’s important that we start to think about the decisions we make, that we always consider those people who put their lives in our hands when we repair vehicles. We all, in every segment, have a role to play in these decisions.”

— CIC Chairman Jeff Peevy, following his onstage interview with the Seebachans at CIC in Las Vegas in November  •

Compiled by John Yoswick, a freelance writer based in Portland, Ore., who has been writing about the automotive industry since 1988, is also the editor of the weekly CRASH Network bulletin (www.CrashNetwork.com). He can be contacted by email at john@CrashNetwork.com. 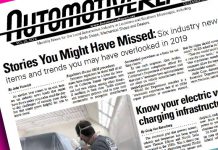 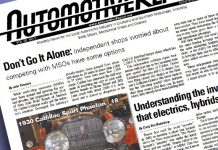 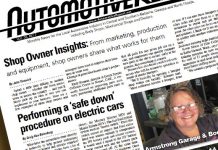